Search
You are here: Home / Development / 6 reasons to be skeptical of pouring more money into the convention center

The Austin Convention Center is considering expanding to another 3 blocks downtown. Here’s 6 reasons to be skeptical:

1. The Convention Center Loses An amazing Amount of Money

Even though the convention center doesn’t pay rent like a normal business, it loses stacks and stacks of money: $15.3m in 2013. It takes skills to run a business well enough to pay downtown rents. It takes special skills to run a rent-free business downtown  and lose twice as much money as you make!

2. The Convention Center Taxes Every Visitor to Austin To Subsidize Their Customers

The only way the Convention Center can balance its budget is to take the lion’s share of the city’s $9 tax on every $100 that every single tourist spends on hotels in Austin–whether they’re in the very small minority here for a convention or the vast majority here to listen to music, visit family, do business, go to Lake Austin, watch a UT game, or any other reason! A case can certainly be made that we should tax visitors to pay for things many visitors want but don’t make much money–parks, music, arts, museums. But we spend the vast majority of our tourist taxes on just one thing–the convention center.

3. The Convention Center Is a Giant Tax Dodge

Unlike the Convention Center, most downtown buildings pay huge sums on property taxes:

If the Convention Center takes even more blocks off of the tax rolls, that could pull millions more dollars in potential taxes away from the city, the county, and Austin schools. That’s a property tax break EVERY SINGLE YEAR that we will be using to subsidize the convention industry.

When people come to conventions, they spend money at hotels, bars, and restaurants. That’s good–it puts people to work and generates tax dollars. But downtown condo dwellers and office workers not only spend money on lunch and cocktails, they also spend money on legal services and dentists and furniture and everything else, not to mention taxes that pay for schools and streets and parks. Is the economic activity generated by conventions more than that generated by other uses? Enough more to justify giving tax incentives? Do we lose any non-convention tourism business because of the costs of our hotel taxes? Are there better uses for our tourist taxes than more convention center? The analysis doesn’t even ask these questions, let alone try to answer them. C’mon guys! You’re asking City Council and taxpayers to invest $400m in a money-losing business and your business case doesn’t answer the most basic questions.

5. The Convention Center Screws up traffic Lack of alternative E-W routes on 2nd and 3rd channelizes all traffic onto heavily-trafficked streets on either side.

Most buildings downtown are pretty small and reserve their disruptive traffic (trash collection, loading/unloading) for alleys. Some buildings, like the W or the JW Marriott, take up a full city block, which forces disruptive traffic into the street itself. The Convention Center one-ups even these buildings by shutting down 7 combined blocks of 2nd St, 3rd St, and Neches, forcing all nearby traffic onto crowded streets like Cesar Chavez, 4th, 5th, Trinity, and Red River. Like channelized water with nowhere else to go, traffic on Cesar Chavez regularly floods. The new plan mostly envisions keeping Trinity open; it needs to go much further to keep all existing streets open.

6. The Convention Center is a bad neighbor Welcome to beautiful downtown Austin! Enjoy the view on your walk!

Most developers downtown don’t just make a nice new building, they spruce up the area around them a bit too. The Independent condo tower is extending out the Shoal Creek Trail and building a pedestrian bridge. The 70 Rainey apartments are fixing up a park on the lot next door to them and building a wall covered in plants so neighbors have something pleasant to look at. The Convention Center has built one of the ugliest walls in all of downtown, helping to make Palm Park one of the most unloved and forgotten parks in the city. They say they’ve learned their lesson and they want to make the expanded section better. It would be a lot easier to believe them if they cleaned up their act first and put some real money toward fixing up Waller Creek and Palm Park and maybe trying to figure out some way to undo the ugliness of their current building. (Full disclosure: I’m affiliated with the awesome Generation Waller, but I’m speaking for myself.)

So, basically, you hate this expansion plan? 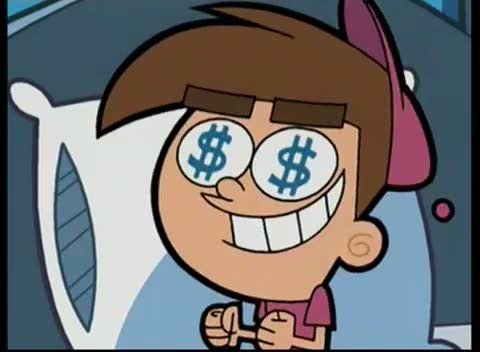 Artist rendition of convention officials seeing the pot of gold available for them to spend in hotel and venue taxes.

Really, not as much as this article makes it seem. But if the convention center authority wants us to believe their goal is improving the city, not securing their budget, they need to seriously step it up:

When the convention center was expanded in 2002, the world was a very different place. Downtown was filled with many low-value, low-intensity uses like surface parking lots and auto lots. One more low-slung ugly building fit in just fine. But now, the city is not approaching the convention center hat in hand desperately looking for jobs and downtown activity. The alternative to a convention center expansion isn’t a dead downtown; it’s a downtown Austin that continues to be one of the most prosperous, livable, desirable places to be in the entire state of Texas, radiating tax dollars out to fund the city. The Convention Center needs to understand this and improve their offer.

In addition, the days when the public was happy to give tax incentives to big businesses to get new jobs are over. Unemployment is scraping bottom in the city of Austin and City Council is rejecting hotel jobs (like the East Cesar Chavez hotel) even when they aren’t subsidized. Multiple bonds for 9-figure public projects like this one have been rejected by the public, for better or worse. An expansion plan that looks like a solid business plan for a money-making business will look an awful lot better to the incentives-wary Council members and public than red ink forever on an ever-growing budget.

Previous Post: « 8 ways the Texas Capitol is going to radically change…for the better!
Next Post: 5 Things We Learned From City Council’s Vote on Granny Flats »