As always, my examples are from Austin but probably apply more broadly.

A majority of Austin households rent, but Austin politics is dominated by the homeowner minority (myself included). There are tons of theories of why renters don’t participate more: renters are as a group younger and poorer than homeowners, and both of those demographics participate in politics less. Renters may move more often and therefore not have had time to develop connections to groups or candidates. But I want to suggest one more narrative: it is draining to participate in a system where people are frequently overtly hostile to you, believe your voice matters less or not at all, and far from being shamed for it, are celebrated.

The fact that renters are viewed as outsiders in politics is so plain to those who participate that it hardly seems to merit proof, but I’ll try to document a tiny sliver of it here.

I’ll start with a trivial example, something fairly easy to brush off. In a city planning session for Imagine Austin, I suggested the city needs to consider the effects of its policies on renters and not just homeowners, and the discussion leader (a city staff member) coded this as “inclusion of nontraditional residents, like renters”. I do believe his heart was in the right place, but as a renter at the time, I felt more unwelcome to know that because I was part of the renter majority, he saw me as an exotic and not just a neighbor. Similarly, from the statements of goals for the Hyde Park Neighborhood Association, a private organization that nevertheless wields considerable power:

Again, this could even come off as endearing: they know that they have an issue with renters and want to overcome it. But it also sends a clear message to renters that this is not their organization. They are to be tolerated, even though...  And this is a neighborhood association in a neighborhood where the vast majority (~80%) of residents are renters! Okay, so not so bad. Well, after some people felt unwelcome by HPNA, they formed a more open neighborhood association, and that’s when the claws came out:

Tell us how you really feel, Betina! Okay, that’s just one person. This kind of hostility to the majority of your neighbors couldn’t be that widespread, could it? Well, widespread enough to make it into the campaign literature of a runoff candidate in renter-heavy District 4, Laura Pressley, who pointed out that her opponent had 0 “Years as a Property Tax Payer” (i.e. he is a renter, not a homeowner): 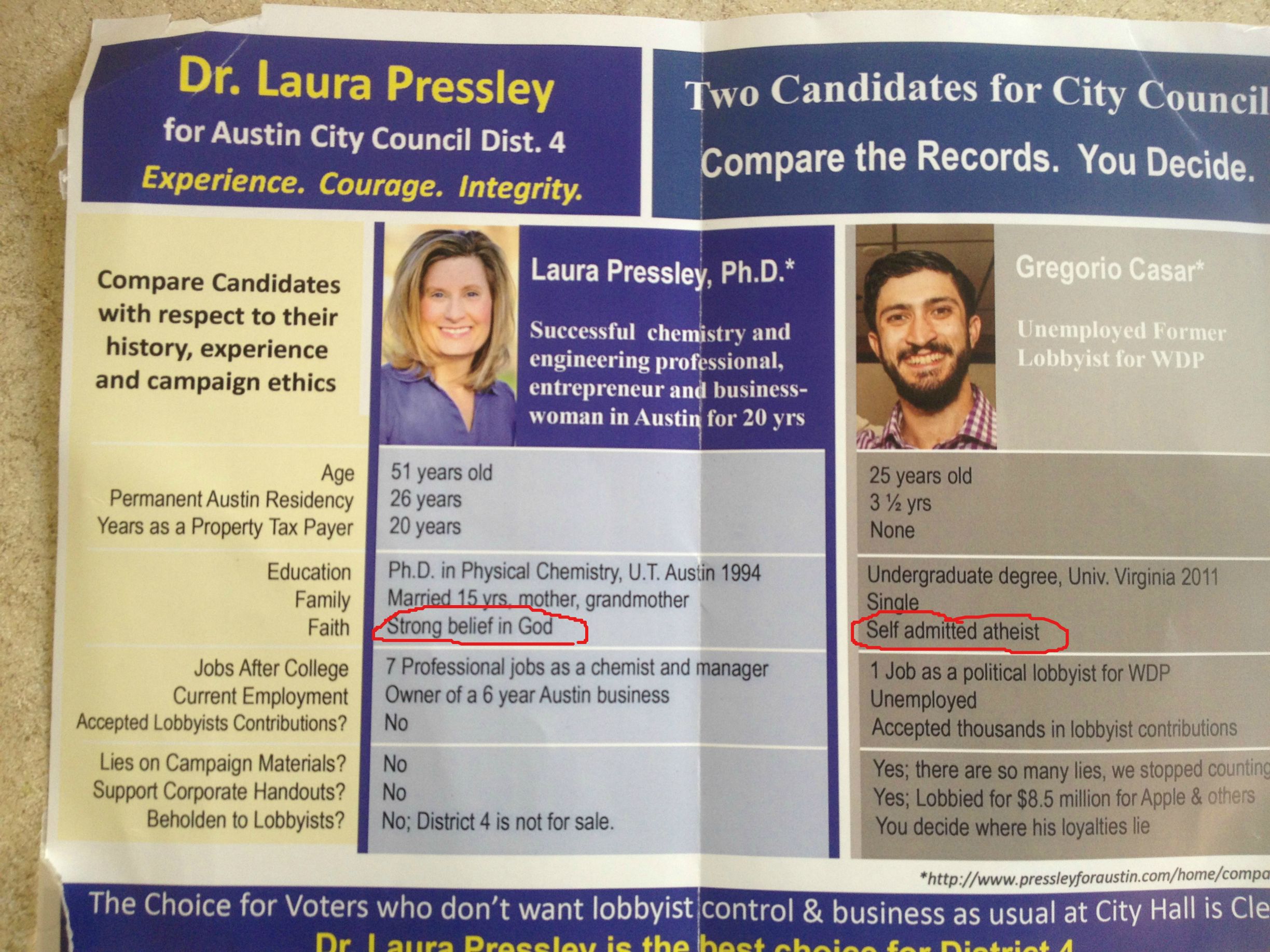 Okay, but Laura Pressley, even though she is on the Executive Committee of Austin Neighborhoods Council and earned enough votes to put her in the runoff, * also believes lots of stuff most people don’t and ultimately lost the election. Does this stuff matter? Well, it’s pretty much the official policy of ANC, one of Austin’s most powerful civic organizations. Here, from ANC’s official comments to the city on CodeNEXT, and why they took positions against welcoming new housing into core neighborhoods:

As we all know, unless you have enough wealth to invest in property, you can’t have emotions regarding the place you live, nor should your opinion matter. Am I being too harsh? No, not nearly harsh enough.

Let me set this next clip up. Austin has intensely detailed rules on “residential compatibility” outlining what a house may look like, what modifications can be made to it, etc. This is footage from the Residential Design & Compatibility Committee, an official committee of the city of Austin with “sovereign power” (i.e. final say) on whether to grant waivers to these rules. The man in front of this committee has sought to enclose his carport by installing a garage door. Under the rules, a house may not occupy more than a certain percentage of his lot (known as Floor Area Ratio or FAR). Garages count toward that space; carports do not. With the carport enclosed, he’d go over the allowed space, so he needs a waiver. He has presented a petition with 52 signatures from nearby neighbors of his. After some early trepidation from President of ANC and RDCC Commissioner Mary Ingle (actual quote: “I would hate for this to start a tsunami of garage doors appearing on carports”), the commissioners get around to discussing the letters of support:

Commissioner Lucy Katz: “If we have 52 people in the neighborhood who say that they’re okay with it, then it’s their neighborhood. They’re not renters. They’re owners.”

After some discussion, they get to counting the letters in favor.

The fact that Commissioners could be explicitly looking to identify whether the people who have chosen to make their voices heard are homeowners and thus worthy of mattering belies the idea that the fault lies entirely with the renters for not participating, rather than with the city for choosing to stifle or ignore that participation.

In a better world, even contemplating, hedged or not, the choice to deny a voice to some of your neighbors because they don’t own a home–whether they are renters by choice or financial necessity–would earn you an immediate rebuke and put you outside the pale of politics until you apologize. Back in our world,  it apparently puts you on a committee with sovereign power. And, in Mary Ingle’s case, it puts you as one of the few citizen voices selected to brief City Council during their policy deep dives.

So what does it matter?

In the scheme of an individual person’s life, probably not that much. This is not apartheid. Renters still live in most parts of the city; there are no separate “renter” water fountains. Most people who attend a meeting like this and get a bad feeling of being unwelcomed, shrug the city committee or the civic organization off as busybodies and find something else to get interested in. It’s not so much that they’re uninterested–within a month of establishing a more inclusive neighborhood association, Friends of Hyde Park had more members than the decades-old HPNA–it’s that they’re uninterested in putting up with the nonsense and hostility that they had to put up with in order to participate.

But the net effect of all these people getting interested in politics and then cycling out is a city whose policy is seriously skewed.  Powerful neighborhood associations dominated by the homeowner minority regularly try–and succeed–in limiting the creation of rental homes in their neighborhoods. This drives costs up and ultimately drives many people out of the city altogether. The most popular policy endorsed by the most candidates in the last election was a homestead exemption–a tax cut that specifically targets homeowners and not renters, and may end up being paid for by raising taxes that renters ultimately pay.

How do we fix it?

The politics of the last couple years have offered great hope in this area. I was very pleased to see Councilmember Delia Garza will request that any analysis of the homestead exemption take into account what effect it would have on renters. City-wide organizations arguing for welcoming all, homeowners and renters alike, have been formed in Austin: (AURA) and San Francisco (SFBARF). On the hyperlocal level, more inclusive neighborhood associations like Friends of Hyde Park have formed. I would encourage people struggling with the frustration of feeling like they are something apart from the old politics to not waste your time trying to join organizations that don’t want you and just go straight to those who do. If you aren’t welcome in the old politics, you are welcome in the new politics.

On the broader level, we need to push for a cultural shift in which it is no longer considered acceptable to discriminate against your neighbors because of their homeownership status. In which, even if you secretly harbor an animus towards those who rent, you know to keep it to yourself or else lose your position in the policymaking apparatus. And a future in which all may participate in city politics without anybody questioning where their down payment is.

* Laura Pressley has objected to my characterization of her above and advised me that I was “potentially committing libel”. What I wrote was obviously intended as an opinion, not a statement of fact. However, it was an uncharitable opinion and I have therefore replaced it.

23 thoughts on “The Pervasive, Pernicious Anti-Renter Hostility in Local Politics”

No affiliation with the link; they just handed this card to me when my daughter was touring the bus.

When people say we don't have enough water for more growth, do they mean growth in population or growth in lawns?

My kid dropped a new YIMBY take this morning: Dadda, I wish we had skyscrapers in Washington DC so peregrine falcons would have a place to build a nest.

Petition to rename the chief executive of Texas counties from the confusing "Judge" to the straightforward "Count".